What is the most difficult thing about narrating and producing audiobooks in your own home studio?

I am by no means a self-production expert, or any kind of audio production expert for that matter. I know just enough to sound as close to professional industry standards as I can with my equipment, my recording space, my signal processing, and whatever storytelling and acting skill I may possess. I couldn’t audio engineer my way out of a wet paper bag in a big studio. Now, two years into a serious effort to make audiobook narration my profession, achieving the ultimate goal of making audiobooks that evoke a compelling and satisfying storytelling experience for the listener is the primary and never-ending challenge. It’s a long road, but for people like me whose brain works a certain way, it’s at the very least fun and interesting. At best it satisfies my need to create in a big way.

I was a Radio-TV major in the mid-seventies and then I got my masters degree in directing for the theatre. I also started acting in stage plays my junior year as an undergrad. So I have at least a conceptual reminiscence of audio production, acting, and directing. I grew up splicing magnetic tape, ripping and reading news copy from the wire, producing and hosting live and pre-recorded radio, and envisioning, guiding, and being guided in the creation of theatre, the kind with a live audience. Throw into the mix a more recent and much longer career managing projects and it feels like audiobooks might be a good fit. Right?

What do my directing brain and my technical brain do while I’m in front of the microphone attempting to reach my full potential as a storyteller? Do these two brains monitor the performance in real time, guiding and shaping theatre of the mind on a separate track as my storytelling brain delivers the best story it knows how? Or do the director and technician somehow take a break or at least objectively observe and simply wait for the storyteller to finish? So far, I’ve found the more aware I am of the director and technician in me while I’m speaking into the mic, the worse the performance. For me, this is the most difficult aspect at the moment.

When I go back and listen to my first audiobook, I am truly embarrassed. I have to think of that production and narration as my audiobook boot camp. In truth, I very nearly bit off more than I could chew as I reacquainted myself to mic technique and taught myself waveform editing, signal processing, and mastering on the job and on current technology platforms. The narration alone was a significant challenge with over fifteen characters, including teenage boys and girls, as well as four languages in addition to English, and three distinct European accents. What was I thinking? Add in my beginner level and slowly developing processing and mastering skills and the experience of completing my first audiobook nearly killed me. Well, not really, but it was very, very difficult. However, I learned a lot. As a result, my next project was a bit easier, as each successive one has been since.

At the same time, I become increasingly more aware that I still have more work to do to meet my own standards. I know I get better with each book, but I do have high standards where listening to someone tell a story for ten or twelve hours is concerned. So, I will continue to have more work to do as the most difficult thing about self-producing at home changes over time. And that’s a good thing. It means I’m making progress. 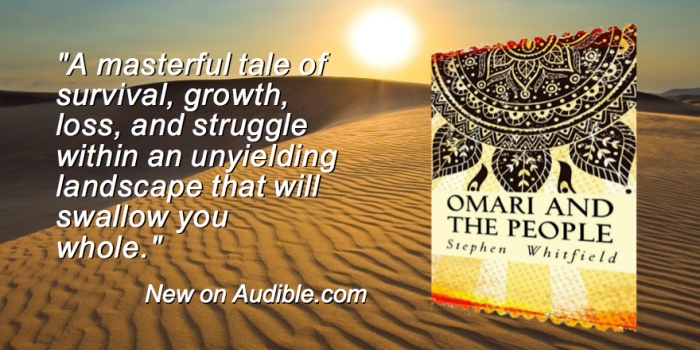 A romantic desert adventure with a touch of Magic Realism. A thief leads the survivors of a devastating fire into the desert in search of a new life. 5-minute Audible Audio Sample

reflections on a passing life

Art doesn't have to be worthy

to be worth sharing

The A P Book Club

Lit Slave
Audiobooks Archives - For the Love of Words

Books... Injected Into Your Faceholes.